Visit Granada in one day from Malaga and Costa del Sol

Book your place!
Rated 4.83 out of 5 based on 4 customer ratings
(4 customer reviews)
Previous
Next

In this Excursion Granada is perfect if you like to visit cities at your own pace, even if you have already bought tickets to monuments, such as the Alhambra, but you don't know how to get there, we will take you by bus from Malaga to Granada. Discover the tapas, the tea shops and the most charming city of Nasrid origin in Andalusia.

See full description (+)
We will pick you up by bus with our guide at the chosen time and place to start the tour. The excursion to Granada in one day from Malaga. During the bus tour you will enjoy the journey along Malaga and the Costa del Sol while our guide will tell you anecdotes and curiosities of the city of Granada. There will also be a stop for breakfast before arriving at our destination. Marvel at the views of the Sierra Nevada! If you like to explore a city at your own pace, no problem! We will drop you off in the centre of Granada and you will have approximately 5 hours of free time. to stroll through its streets of Nasrid origin. Visit the Cathedral of Granada A Renaissance jewel that symbolises the glory of the Catholic Monarchs in 1492 and where the remains of King Isabella of Castile and King Ferdinand of Aragon rest. The Plaza NuevaGranada's oldest street and a crossroads in the historic centre. The Torre de la Velaexplore the famous Elvira Streetbetter known as the street of tea shopsalso ideal for tasting the famous tapas from Granada in the restaurants and bars of the city centre. Strolling through Carrera del Darrothe most photographed street, and to fall in love with the Paseo de los Tristesat the foot of the Alhambra and Albaicín. You can also explore two of the oldest quarters of the city of Granada, the Sacromonte quarterthe cradle of gypsy culture, and the Albaicín quarter from where you can go up to see the best views of the city from the Mirador de San Nicolás and contemplate the Alhambra of Granada against the backdrop of the Sierra Nevada. At the time indicated by our guide we will meet again for the return to the same place of the pick-up.

Option: Visit of the Alhambra of Granada

If you prefer to make your visit complete, please do not hesitate to book the Excursion to Granada with tickets to the Alhambra in Granada from Malaga.
What's included (+)
What is not included (+)
Remarks (+)

Details of the excursion

This tour includes some pick-up stops along the Costa del Sol. 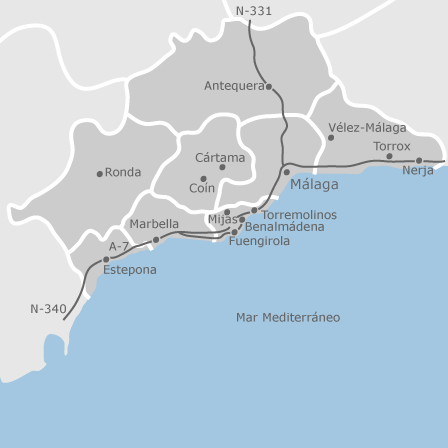 Visit Granada in one day from Malaga and Costa del Sol

Total:
Book
How to book?

3. Select the start time of the activity.

*Note: The time and place chosen corresponds to your meeting point for the excursions that include a bus.

5.Fill in your details in the form.

Frequently asked questions (+)
What time does the activity end?

The activity lasts 8-10 hours, depending on your pick-up point.

Below you will find the approximate time of return by zone:

Does this tour include entrance fees to monuments?

No, this tour does not include entrance fees to any of the monuments. However, this tour is ideal to visit Granada at your own pace.

Does this tour include entrance tickets to the Alhambra in Granada?

Is there a breakfast stop?

Yes, we will make a short 30-minute stop for breakfast.

Is it possible to bring food and drink on the excursion?

Yes, we recommend you bring a snack and a drink, usually 1L of water, with you for the activity.

Is there free time for lunch during the excursion?

Yes, we recommend that you take advantage of your free time in Granada to have lunch.

No, pets are not allowed in this activity.

If you have any further questions, please do not hesitate to contact us.

04 Customers have recommended this article

Leave feedback about this Cancel reply